When we first announced that we’d become a Brooklyn Tweed stockist, we were quickly joined in our enthusiasm by a great many knitters eager to get their hands on Brooklyn Tweed yarns. After all, these are yarns with big reputations, yarns that lots of us had seen only online. No surprise, then, that I have two blog-posts-worth of show-and-tell in Brooklyn Tweed yarns, some of which are still on the needles. Let’s start with those! 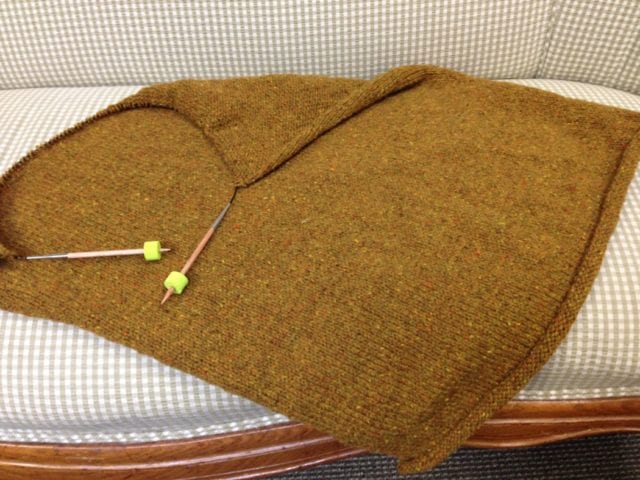 Jodi is knitting a Churchmouse “Easy Folded Poncho” with Brooklyn Tweed Shelter in “Hayloft,” a rich mustard yellow that, like all colors in Shelter and Loft, seems to grow more complicated on each viewing. The pattern calls for DK weight yarn at a smaller gauge than what Jodi’s getting, which means her poncho will be a few inches bigger, and so much the cozier. Note her Cocoknits Stitch Stoppers, keeping those precious stitches safe! 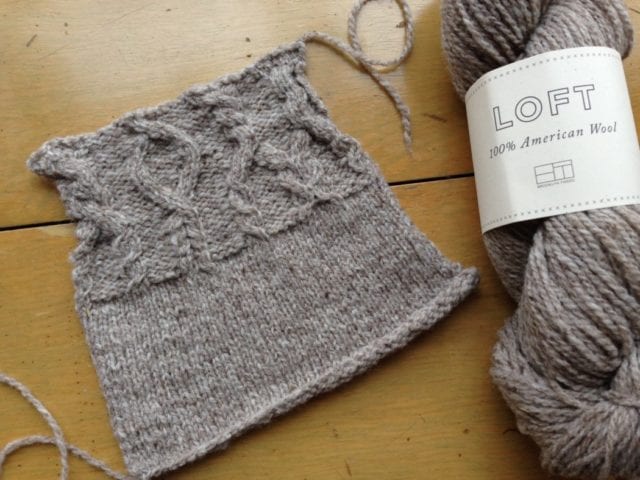 Anne considers a swatch a treat, a little preview of what’s to come when she finishes current projects and allows herself to cast on for the next. Above is her swatch for Michele Wang’s “Hellebore,” knit with Brooklyn Tweed Loft in “Woodsmoke.” 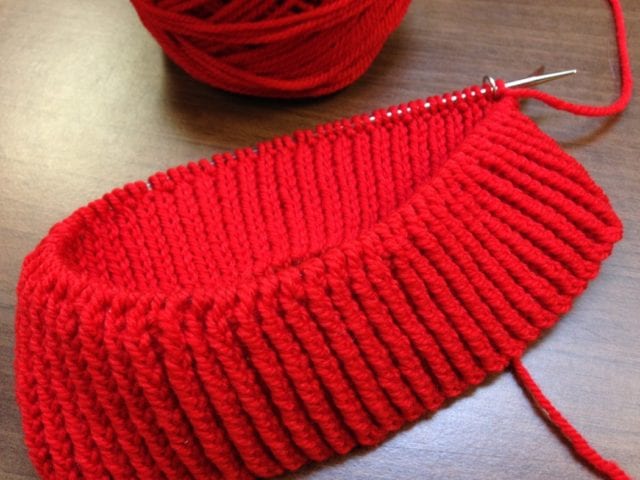 Shelter was the first Brooklyn Tweed yarn I reached for as soon as it arrived here at the shop. That hat has been finished for weeks, and we’ll see it in the next blog post. Right now, I’m working on a “Hirombe” hat in Brooklyn Tweed Arbor, using the nearly-fluorescent “Firebrush” color, a bright orangey-red. The hat, designed by Jared Flood, is decorated with twisted stitches, and though it looked straightforward enough in the photo, I learned at least three new techniques before my swatch was two rows long. 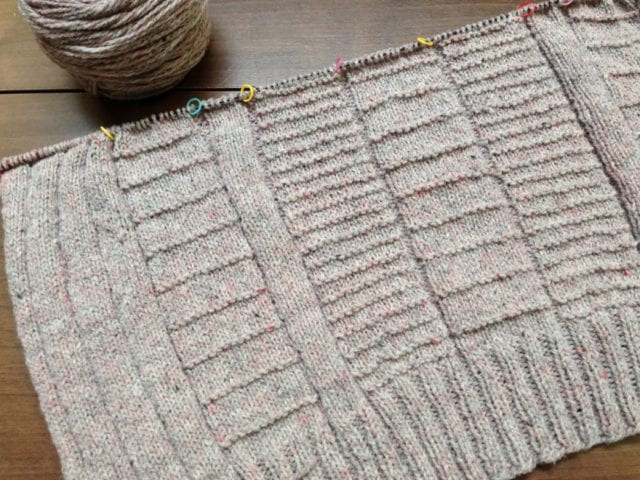 Sidney is already well into her “Grille” pullover, designed by Bonnie Sennott and knit with Brooklyn Tweed Loft. The color is “Postcard,” an intricate one somewhere between pink and gray.

I can think of so many more Brooklyn Tweed works-in-progress that have started life here at the Hillsborough Yarn Shop: a “Flight,” “Seeds Hat,” and two “Boardwalks” in Loft, a “Far Hills Hat,” “Baa-ble Hat,” “Tinder,” and “Hadley Pullover” in Shelter; a “Byway” and “Guernsey Wrap” in Arbor, and lots of others. Who else has Brooklyn Tweed yarns on their needles, and what are you making? Leave us a comment, or come by the shop to show us your progress, and look forward to a second Brooklyn Tweed show-and-tell post here on the blog very soon!