We always love to see what you’re making with HYS yarns, and I love to take photos of your beautiful finished pieces to share here on the blog. Today, I have a bundle of show-and-tell projects, too many for one or two blog posts to hold. Let’s call this a week of show and tell, beginning with knitters who’ve made the same pattern more than once. 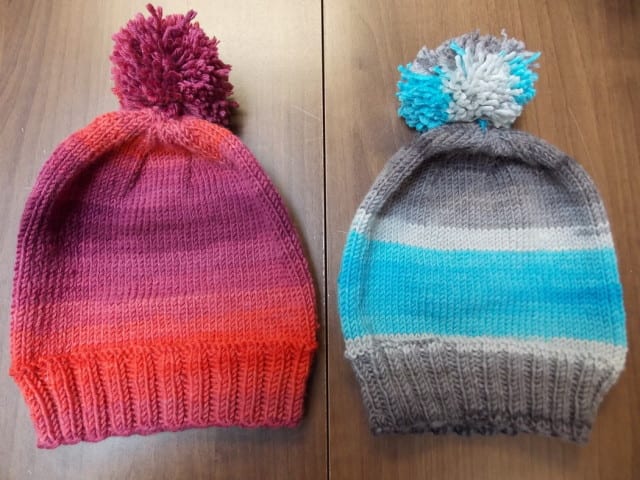 With two grandsons and two granddaughters, Anne often knits in duplicate. This pair of hats went to her grandsons, knit in the soft, superwash, self-striping Lang Merino+ Color. Her pom-pom maker came in handy, too! 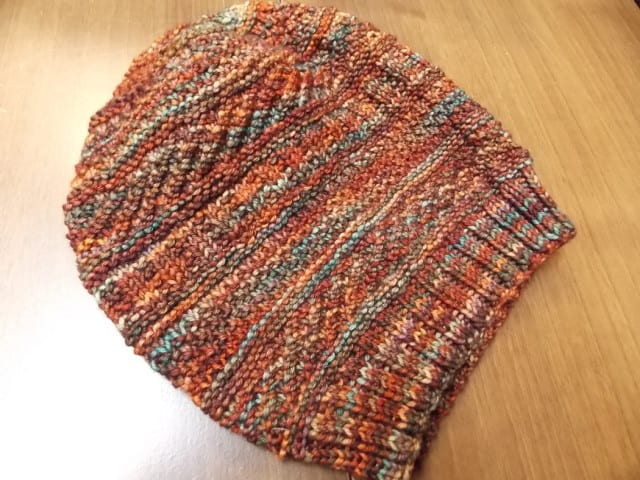 Here’s one of Judie’s “Dustland Hats.” Though I only have a photo of this one, I know she’s knit at least two others, with plans for more to come. The pattern calls for worsted weight yarn, but Judie used Malabrigo Arroyo and smaller needles, casting on for the largest size to make up the difference in gauge. It’s the variety of stitch patterns that seems to keep her coming back to this Stephen West pattern; every few rows there’s some new knit/purl combination to play with. 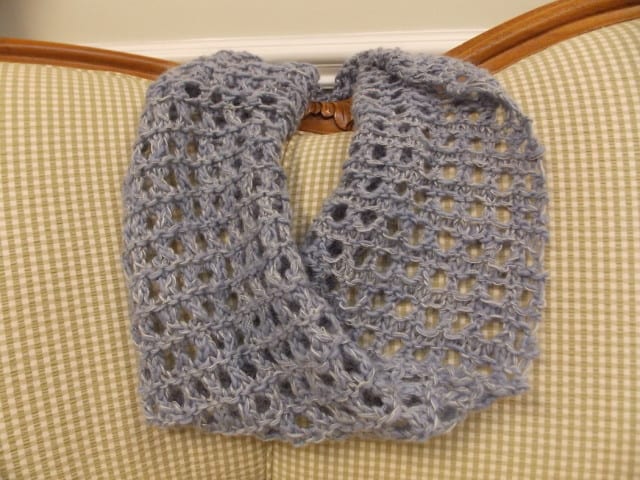 Sherri came in last week with two of her eponymous cowls, ready to send them off and restock her stash with more yarn for the next batch. She knit the cowl above with Manos Wool Clasica and Shibui Silk Cloud, blending a soft blue and a silvery gray. For the cowl below, she used some Berroco Peruvia that had been lingering in her stash, a teal shade that she paired with a deeper teal in Silk Cloud. 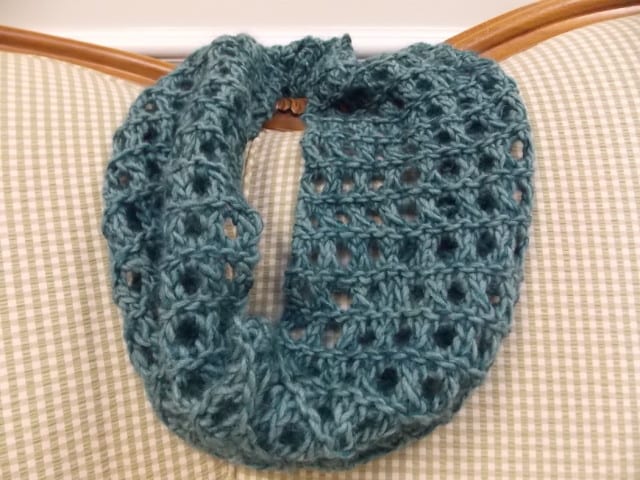 Sue also has a yen to knit in duplicate — nay, in triplicate! This gansey-like stitch sampler sweater pattern was handed down by a friend, and Sue knit her first in Plymouth Llama Cotton Worsted. She tinkered with the yoke a bit to modify the drop-shoulder sleeves, preferring something closer to a set-in sleeve. 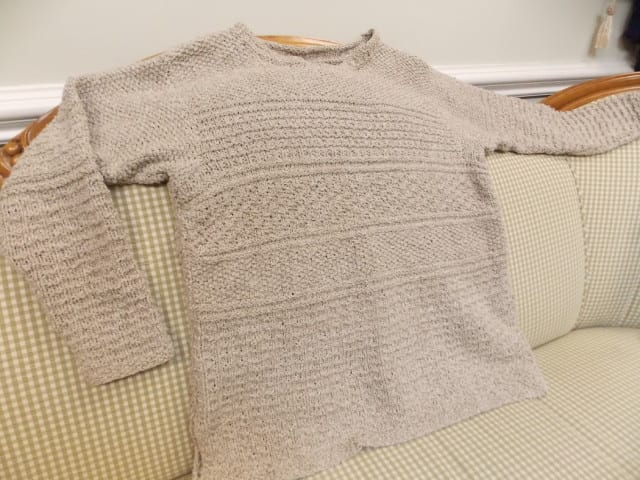 Always fascinated by how different yarns and fibers behave, Sue made a second sweater using Debbie Bliss Donegal Luxury Tweed Aran. This blend of wool and angora makes a less floppy fabric than the cotton blend, with a bit of a fuzzy halo. 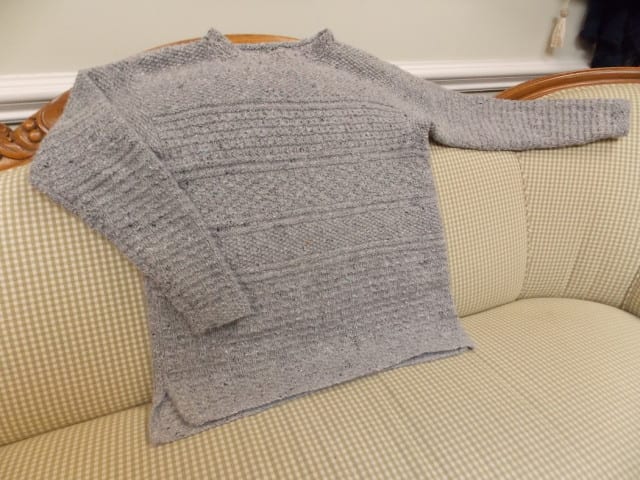 Each sweater got a matching garter stitch cowl, as well, for maximum flexibility of use. One minute it’s a cozy turtleneck, the next, a crew-neck. 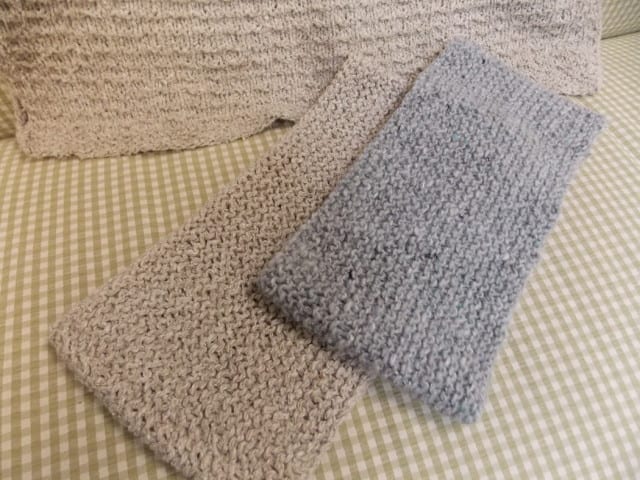 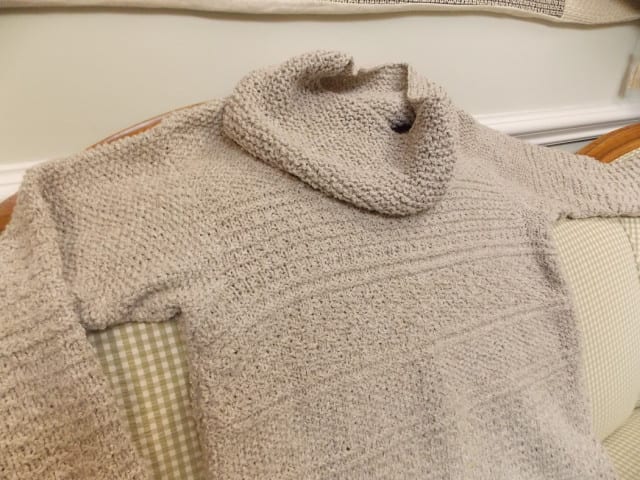 She’s already started a third version of the sweater, sticking with the Debbie Bliss Donegal Luxury Tweed Aran, but switching from a neutral shade to a pleasing purple. 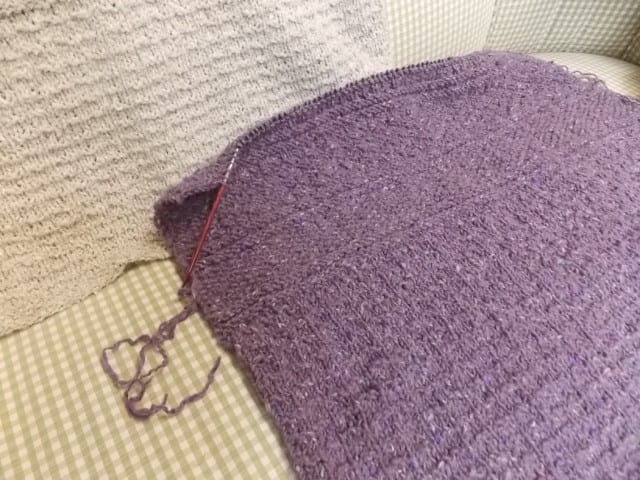 Thanks to the many knitters, crocheters, weavers, and other fiber artists who use yarns from our shop in their creations; we love seeing what you make! Keep your eye on the blog for plenty more show and tell throughout the week.