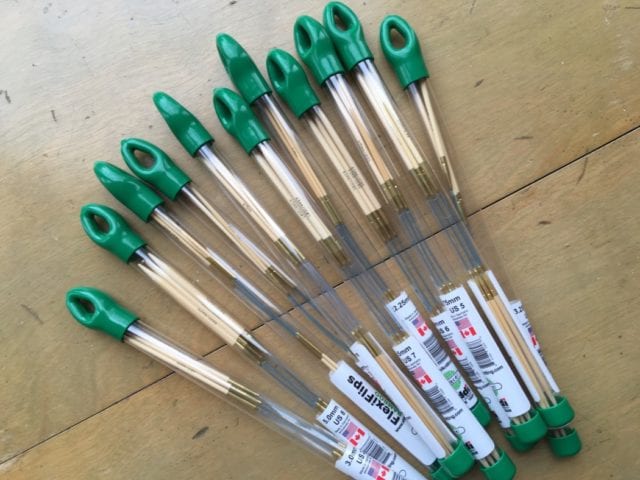 Addi FlexiFlips offer an alternative to double points or magic loop for small-circumference knitting. They come in tubes of three 8″ needles, and the basic strategy is to divide your total stitch count in half between two needles, then knit with the empty third needle. 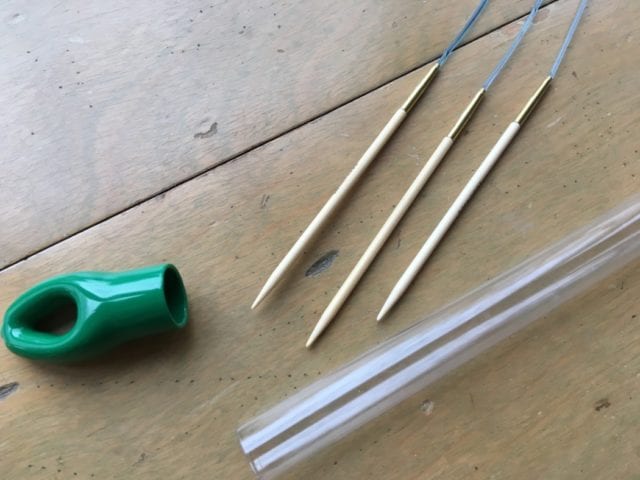 For some knitters, it’s far more comfortable than other methods of working in the round on small circumferences for sock- or mitten-knitting. Come by the shop to try them for yourself! We keep a sample set out so you can try before you buy. 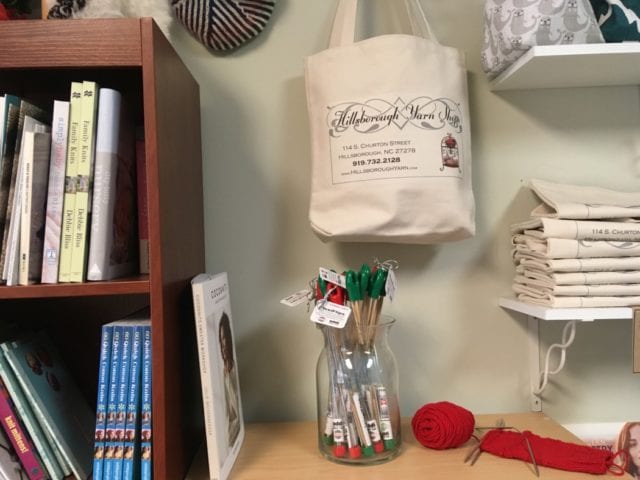 So much in knitting is a matter of preference – no one brand or shape or type of needle is inherently better than another, but most of us develop preferences as we knit, and we try to offer tools for everyone’s tastes. The Bamboo FlexiFlips will suit those who love wooden needles, which have a less slippery surface than metal. If you find addi’s metal needles too slick and want more control over your stitches, these needles are worth a try. 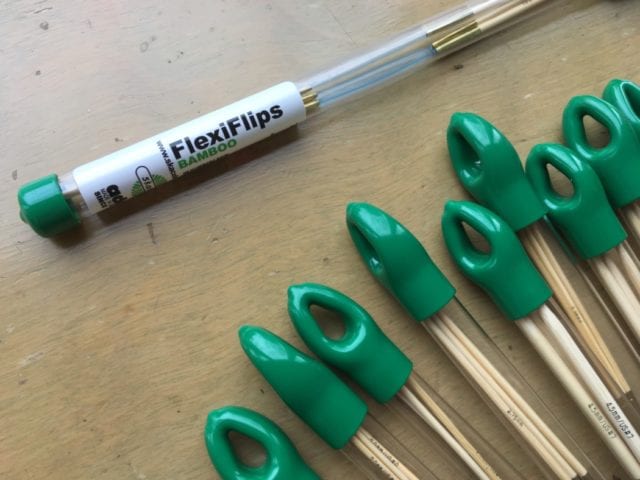 Skacel and Della Q have collaborated to produce a needle case designed especially for FlexiFlips – look for them near the FlexiFlips here at our shop! 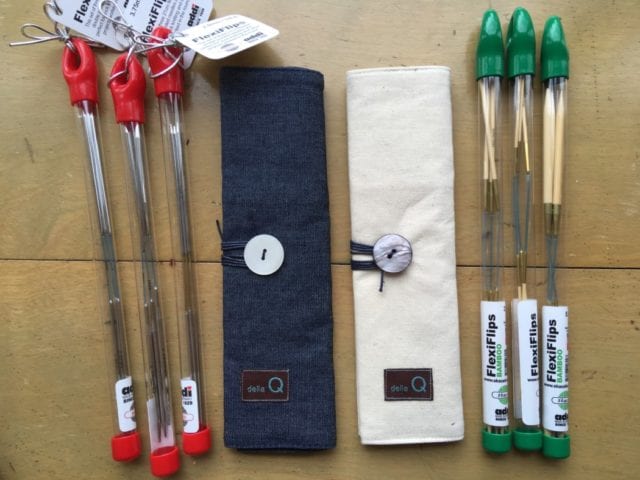 We’re thrilled to have a fresh bouquet of addi FlexiFlips here at the shop! These new needles from addi offer an alternative to double points or magic loop for small-circumference knitting. 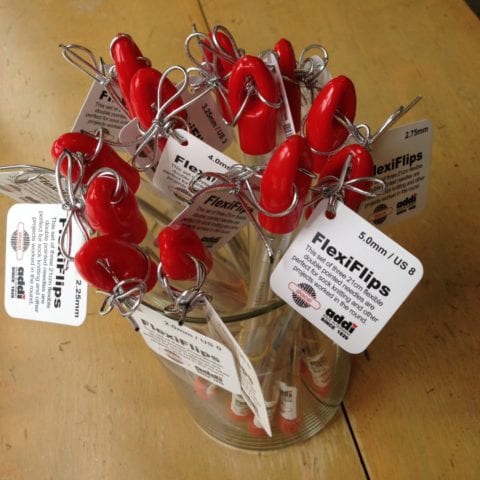 They come in tubes of three 8″ needles, and the basic strategy is to divide your total stitch count in half between two needles, then knit with the empty third needle. 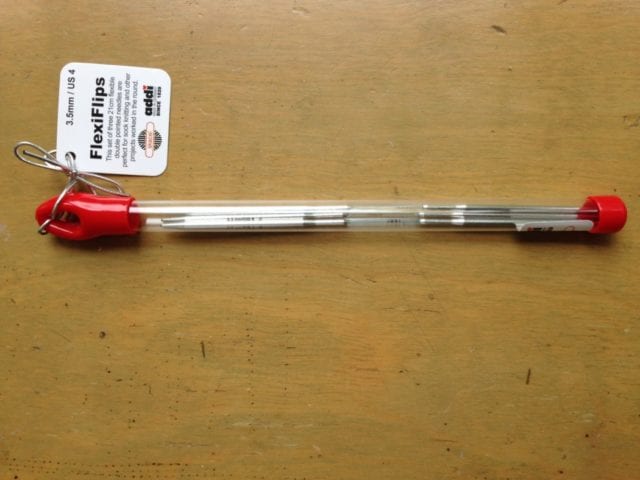 FlexiFlips have been in and out of stock since their debut last fall, on account of their tremendous popularity in our shop and in yarn shops around the world. This popularity begs the question: what’s so great about these FlexiFlips? 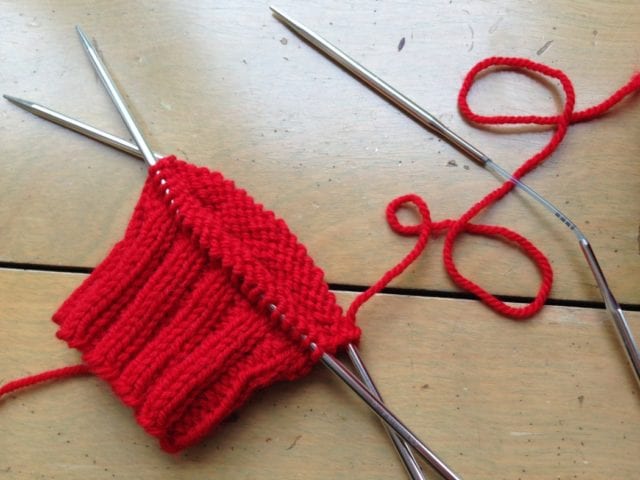 As in so many facets of the knitting world, the answer to this question comes down to preference. I know plenty of knitters who swore off sock-knitting until they discovered magic loop, just as many who knock out sleeve after sleeve on two circulars, and still more who delight in their double points. That last group is where I reside, so for me, the FlexiFlips are fine – but I’m sticking with my DPNs, because they’re comfortable in my hands and work well for me. 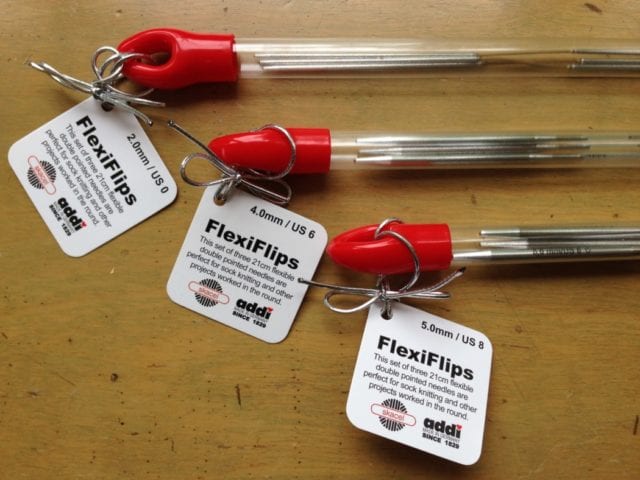 What’s really great about FlexiFlips is that they offer another option for folks who aren’t crazy about any of the existing techniques for knitting small circumferences in the round. We’ve had some knitters who come in, try the FlexiFlips, and leave elated, with three sets in their shopping bag, but we’ve also had some who try them, then politely put them down, saying, “These just aren’t for me.” 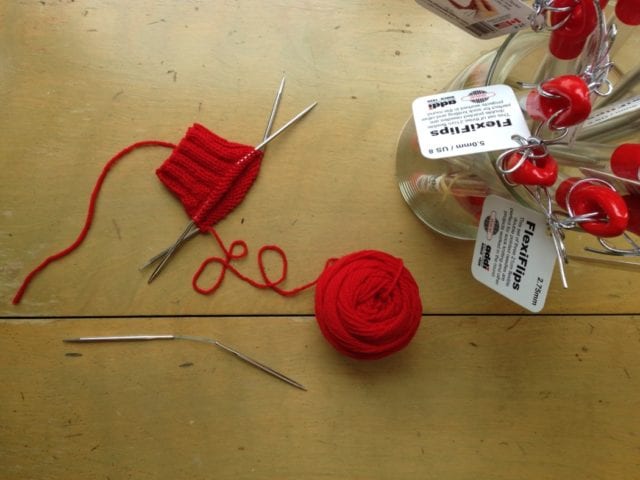 Come by the shop to give them a try and see where you stand – we have some Brooklyn Tweed Arbor on the FlexiFlips for you to play with!